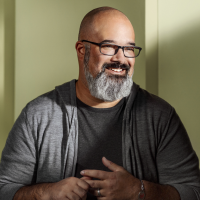 If you’d like to see all his links online, please don’t hesitate to go to: https://jjasghar.me

JJ works as a Developer Advocate representing the IBM Cloud worldwide. He mainly focuses on the IBM Kubernetes Service and OpenShift, trying to make companies and users have a successful onboarding to the Cloud Native ecosystem. He’s also been known in the DevOps tooling ecosystem and generalized Linux communities. If he isn’t building automation to streamline his work, he’s building the groundwork to do just that. He’s been an avid homelab and self-hoster of open source software for years and gives back to that community as much as physically possible.

He lives and grew up in Austin, Texas. A father and husband, trying to learn to balance his natural nerdiness with family life. He enjoys a good strong dark ale, hoppy IPA, some team building Artemis, and epic Gloomhaven campaigning.

He has dove headfirst into Fedora since IBM buying Redhat, but still secretly wants FreeBSD everywhere. He’s always trying to become a better web technology developer, though normally just uses bash to get the job done.