This is a blog post on how I was able to get Jenkins with the Jenkins Job Builder (JJB) to start running Powershell scripts on a remote Windows machine. Doing research into this project, it seems there were all the pieces of this possible layout, but no tutorial. This is my attempt to make this tutorial, and any gotchas I had, happen.

My ultimate goal here is to create a Jenkins pipeline that takes Chef Automate and creates a vApp out of it. I’m only going to focus on building the Jenkins portion in this post.

As you can see from this layout, I still leverage a Ubuntu 16.04 box for the Jenkins server, a remote git repository for the storage of the JJB files, and two slaves for executors. If you follow the chart left to right, you should see the workflow I have created.

Any Powershell jobs runs on the Windows machine, and any Bash based jobs should run on the Ubuntu machine.

So lets get started!

The first thing you need to do is create a machine that can run both Jenkins and the JJB. Luckily I have already created a blog post on how to bootstrap this process. I leverage the Chef cookbook and do some local installation of applications for the JJB. (I swear I’ll write a cookbook to automate this at some point, but it’s not too bad.) Go ahead and go here to start if you don’t have it set up already.

After getting Powershell installed, you’ll need to install Java. It’s the easiest way to get the Jenkins service running on the machine; I chose Oracle Java, mainly because it was easy and gets the job done. (We can debate the licensing and all over :beers: if you ever want to.)

With this, you should have all of the dependencies required for a Windows Jenkins slave. I have a plan to create a Windows based cookbook to automate these two installations, but like the JJB cookbook, I just haven’t had the time to make it.

Add node to the master

The next step is to make the Master know about the new node. This is done via logging in with an account with admin rights then clicking on Manage Jenkins > Manage Node and the following link. 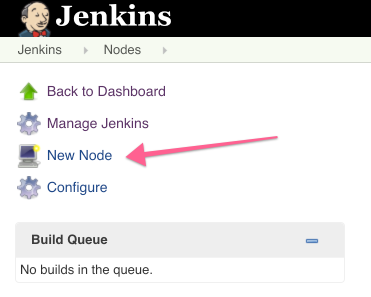 Fill in the first bit of the information, for instance Name of “windows-node” or the like, then click the Permanent Agent radio button and OK. 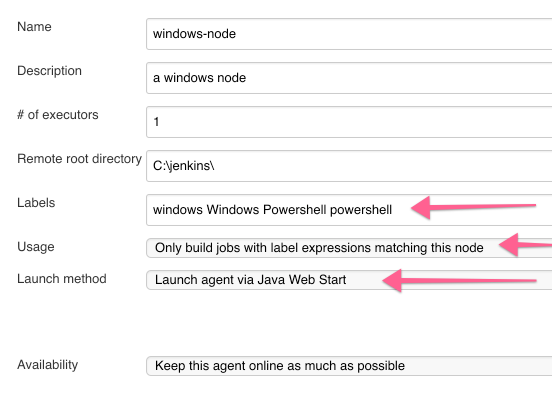 The ones with the arrows are the most important to take note of. The “Labels” section is how we make sure the JJB sends the correct job to the correct executor. You can put whatever you want here, but from the templates I have, you’ll see that the powershell as the label. Notice also the spaces between the labels, this is intentional, commas make Jenkins sad it seems.

The next two arrows are also important to set, the Usage section verifies that the label is what you declare. The other option if not changed to the one suggested, you might run Powershell on the Ubuntu machine! The final arrow, makes sure that you have the Launch button for your Windows slave. If it isn’t there go to this stackoverflow to fix the problem. It seems by default it’s not enabled, so keep that in mind.

If you’d like to set up a Ubuntu slave node, you can follow these same steps but s/Powershell/bash/ and s/Windows/Ubuntu/ should get you there too. I’m not going to type it all out but if you have problems don’t hesitate to reach out to me via twitter.

Connect the Windows machine to the master

Now that everything is setup, you can now log into your Windows machine and go to your Jenkins instance http://<jenkins>/computer/windows-node/ and find the Launch button, like the following. 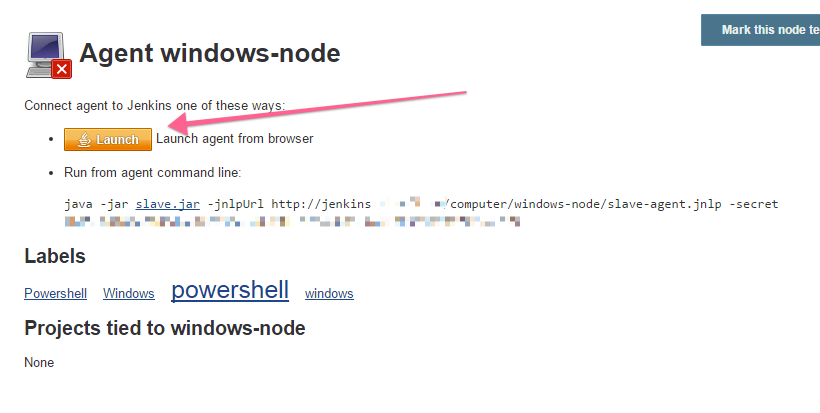 Congrats, everything should be should be wired up now. Now lets try to run some jobs.

The first thing I do when building a new Jenkins machine ran via the JJB, is I set up something called update-jobs. It’s a basic job that watches a git repo, (in my case github), and then runs the jenkins-job-builder application when changes are made.

Here is a basic template that I use, you’ll need to edit for changes in your environment.

As you can see it’s pretty straightforward, and if you give your user(s) access you can even use private repos!

Now when you make changes to your repo and push, you can either Build Now or even link up the webhooks to update your jobs. Pretty slick.

Here is a bash template job, to make sure that everything is wired up. It’s pretty straightforward too.

Here is a powershell template, go ahead and add this to your repo and push both up. This will be a good verification. Take note of the node: 'powershell' line, this is the Labels I was talking about earlier, you can have anything there, this is just what I defaulted to.

I hope this provides a coherent basic walkthrough (or helped) to setting up a Distributed Jenkins build with both bash and Powershell.

Like I said at the beginning, I’m working on getting PowerCLI working so I can automatically create vApps, so ideally it’ll build off of this.

If you found this useful, please tweet at me, I’d love to make this better or fill in any gaps I might have forgotten!